Much of the hype around Artificial Intelligence centers on some vague sense that it continuously learns from the world around it so it gets ever-better at performing tasks. In reality, it's important to understand that the core truth underlying this is much simpler and more powerful: AI technologies allow us to make better predictions than we could before.

Despite the simplicity of that fact, it is an enormously powerful building block which enables automation on a scale we've never seen before by disrupting task loops across the information and physical worlds. Understanding it will allow you to better appreciate the kinds of change it can and will drive.

The semiconductor represents a useful analogy for this reduction. Semiconductor technology obviously changed the world but these empires were built on top of a single simple truth: it reduced the cost of arithmetic. That most fundamental use case forms the basis of computing and, at sufficient scale, allows us to do everything we can today.

In the case of AI, what it makes dramatically better/faster/cheaper is prediction. Just like semiconductor arithmetic formed the basis for advanced computing, better prediction forms the basis for better decision making and, ultimately, an automated disintermediation of human action in a wide range of tasks.

Let's look at how that works and why that has huge implications for just about every task that exists in the world around us today.

Anatomy of a Task

We'll start with an individual Task. A Task is really just the smallest quantum of meaningful work, aka a "thing you want to get done". It may be as simple as playing another song after the first one finishes or it may be as complex as completing a radiology report after viewing the images. Or collecting the right package in a warehouse. Or shooting herbicide at a weed in a field. Or sending a sales email. And so on.

Everything we do is broken up into tasks and the potential for AI is that it makes these tasks significantly better and, ultimately, closes the loop to achieve their full automation.

To understand why, let's look at the anatomy of a particular task: 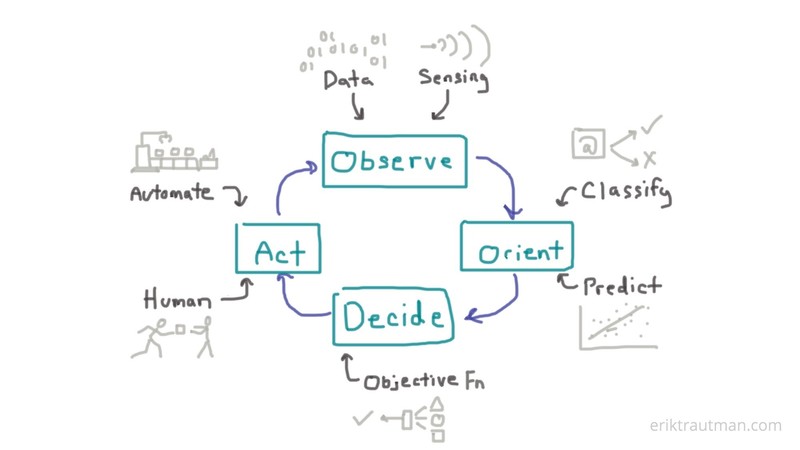 When you look at each of the components of this, there are a handful of key ways that a particular task can be improved. We've historically focused automation efforts on the "Act" portion but the real potential for new technologies is to address the prior 3 steps:

The first step, "Improving Observation" is done via improvements in sensing technology (for applications which require understanding the environment), more robust data pipelines, more rapid data feedback loops and more democratized access to data within an organization or application. The ability to feed a deeper and broader set of data into today's machine learning (ML) models than ever before means we can also utilize a much broader range of observation than ever before. Some of this improvement is via complementary technologies (eg sensing, data processing) while others are more squarely under the admittedly-broad umbrella of "AI" (ML, computer vision).

"Orientation" improvements are the bread and butter of today's machine learning processes, which make prediction significantly better and cheaper. Classification models predict which bucket something should fall into to better understand the current state (eg. whose face is this? Pedestrian or mailbox? SPAM or not SPAM?). Other models predict the future state (eg. Which product would the customer likely buy next? Which email version will most likely convert?). Both of these processes used to be significantly human-powered and are now highly machine-powered.

"Decisions" are already significantly improved by having a more accurate Orientation and Prediction of the future but are further improved by the automated retraining process that todays models can deploy to tweak their objective functions to achieve the desired action result. There are also whole classes of models specifically designed for optimization which help supercharge this step.

It wasn't long ago that the entire OODA loop was fully human-powered. The Industrial Revolution helped alleviate much of the "Act" step from human hands and supercharged our ability to produce. The early stages of automation allowed us to begin offloading full tasks as long as the Observation and Orientation were very simple and the Decision could be logically hard-coded ahead of time.

That left whole classes of tasks still heavily manual. For example, salespeople deciding which leads to follow relied on only the Observations they could collect themselves and Oriented based on heuristics they developed over years of practice. Now automated processes scrape data from 100 places on each lead and predictive models score them based on their quality and likelihood of conversion so salespeople can focus their efforts much more efficiently. In many cases, the Decision of who to reach out to and the Action of doing so are already automated, leaving the human salespeople to step in only when needed most (to bring the deal to the close). Even that is continuously more vulnerable.

The implication is that any task which has previously resisted automation based on limited sensing capability or the need for a human to properly classify, predict or decide is in major danger of being disrupted by AI-driven automation.

For the moment, a variety of more complex tasks are being chipped away at each step of the process while simpler tasks are closing the loop entirely and becoming fully automated. This isn't a single process, it's the combination of hundreds of technologies and businesses each working to improve a particular link in the chain and the biggest step changes in that improvement have come from AI technologies.

In fact, an undue amount of effort is currently spent at each step where a human must be brought back into the loop because the system has to re-orient the human and make it clear what is expected. As more steps of the OODA loop become automated, the systems begin to streamline by cutting out that unnecessary interaction. A fully closed loop is significantly stronger than the sum of its individual parts for this reason.

Here are the simple heuristics for thinking about the vulnerability of a particular human-powered task to AI disruption:

Essentially, every aspect of what makes us slow, inexact or limited as humans is under fire from technologies which specialize in those narrow dimensions and which will ultimately continue closing the loop on more and more tasks for us. This will make these tasks significantly better, faster and cheaper than ever before, opening up new use cases and new markets all along the way.

Ultimately, the process that started with the first mechanization of human-powered actions will finish by liberating us from many workflows entirely.

When a task goes wrong, how do you figure out why that occurred? With humans operating at each step, we have easy explainability (even though humans are rarely very good at explaining themselves in reality). With AI, where many of these steps may become obscured beneath the models, explainability is much more challenging.

This is already a major issue and it will be interesting to see how it evolves as AI closes the loop on more and more tasks.