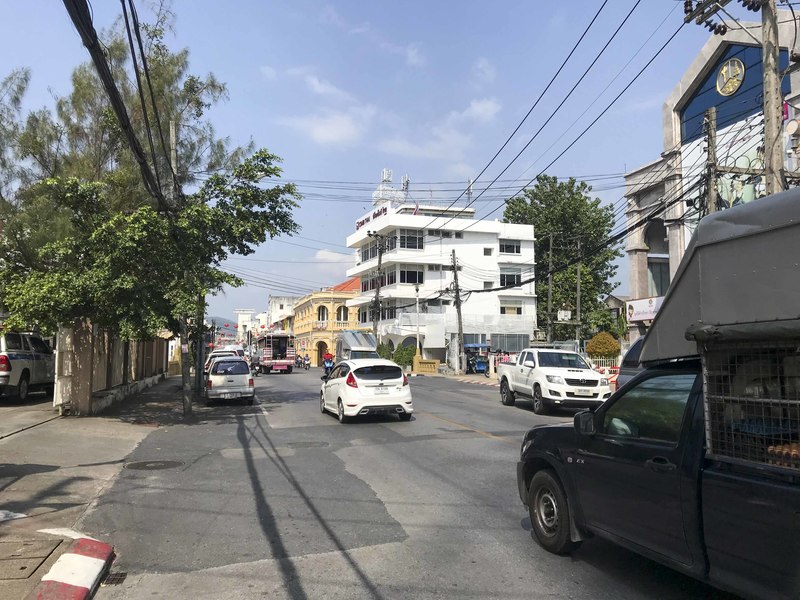 Koh Phi Phi was two things: breathtakingly beautiful to look at and a total shit show on the ground.

The sea was clear tropical green and the water taxis which took tourists to their hotels were adorned with bright colors that added to the saturation of visual energy. 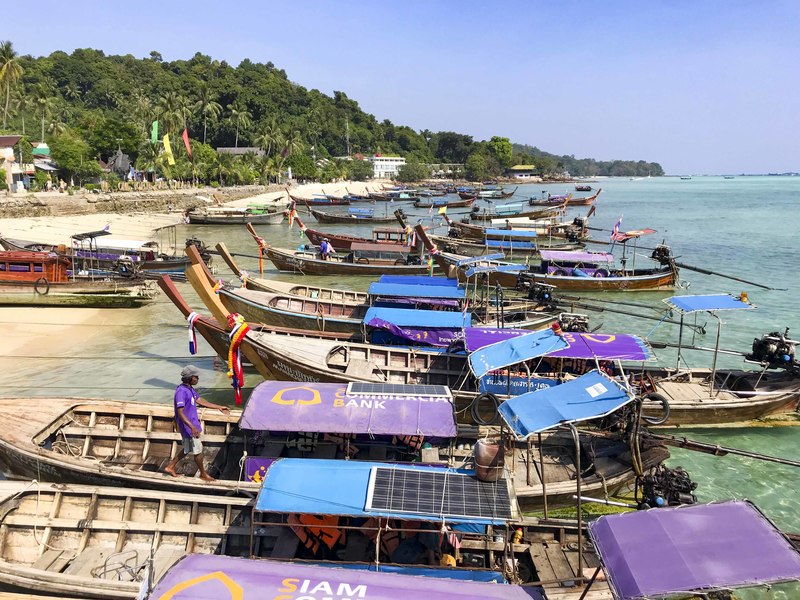 The island is small enough that it doesn't allow motor traffic on the roads so the crush of tourists winds its way along narrow streets. Porters bearing rickshaws full of luggage regularly blaze a path through the accumulated masses. My lodging was on the other side of the island, where low tide had stranded a ship for the night.

If the island had a pulse of its own, it was drowned out by the deep bass of dozens of clubs and bars blasting sound systems and street vendors hawking "Most Alcohol Buckets" to stumbling Australian youths. The atmosphere was far more spring break than beach-side vacation. Though the energy was nothing of the sort I was seeking, I did enjoy the fire spinners on the beach who were absolutely world class masters of their craft.

Bleary from the sleep I could only snatch in brief patches due to the literal shaking of the walls from a nearby sound system, I set out the next day on a long tail boat to the legendary Maya Bay, filming location for the 2000 Leonardo DiCaprio movie The Beach.

The float around the island of Koh Phi Phi Lee was gorgeous but the bay itself was a classic scam. Upon arrival, we were informed that we had to pay a 400 baht entry fee to get off the boat and spend an hour on shore or swimming in the local area. Who was keeping track of this money and how it made its way to the national park was unclear and it was definitely a sour point amidst an otherwise wonderful excursion. 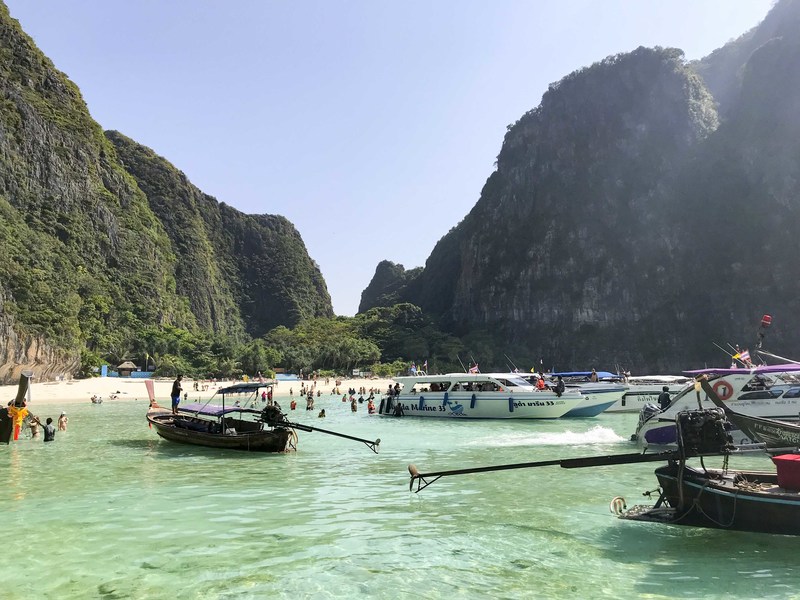 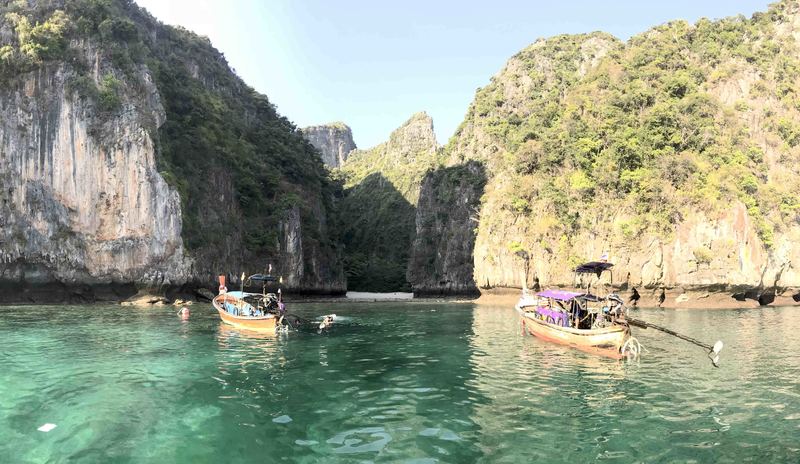 After getting a taste of climbing in India, I resolved to try out some of the well-regarded routes in Thailand. Upon arriving at the climbing shop for the morning class, I was greeted by a closed gate and no explanation for the closure. Luckily, another traveller who happened to have both a rope and spare set of shoes was caught in the same situation so we resolved to tackle the cliffs ourselves. 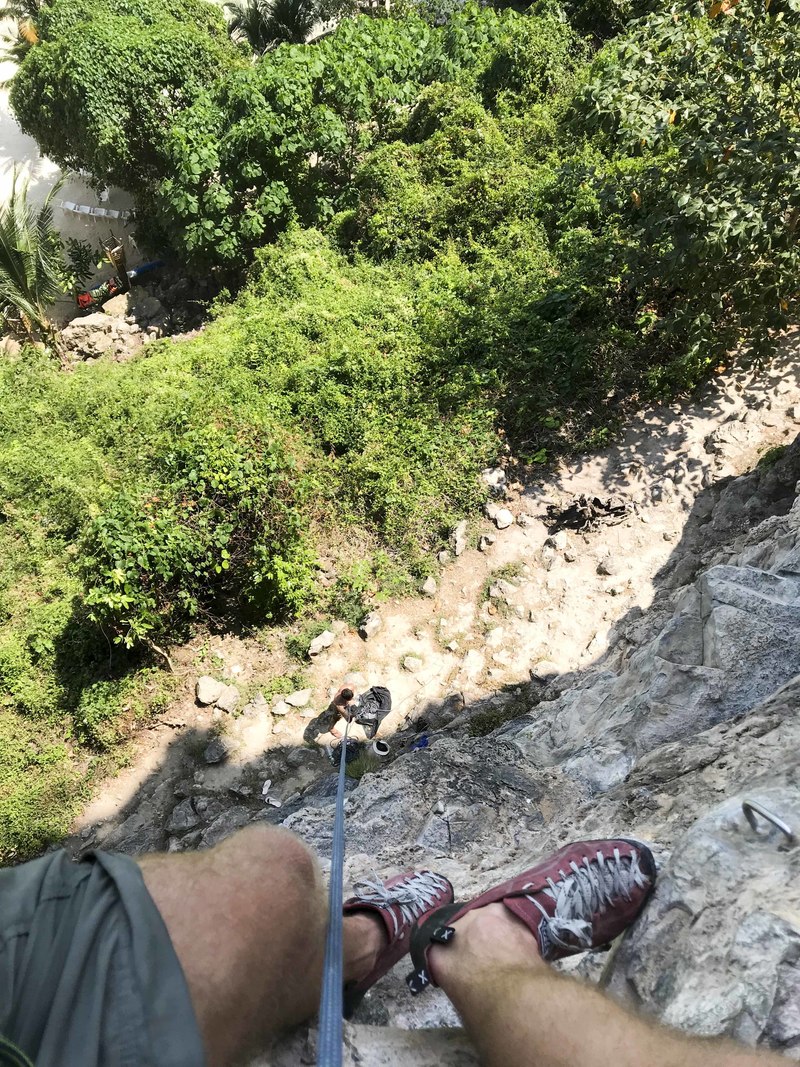 There's something uniquely special about topping out and then looking out over such an incredible vista. The rocks were sharp, the sun blistering hot and my toes jammed together like deli dogs in a vice but that fades when you can breathe deeply of sea air and know that there's a cheap massage waiting on the beach for when you get tired.

Excited to climb more, I hopped another ferry to the legendary Railay and Tonsai beaches. Offloading itself was an adventure. The beaches are too shallow for the ferry to dock so you have to brave the waves as long tail boats pull alongside and holler for your destination. 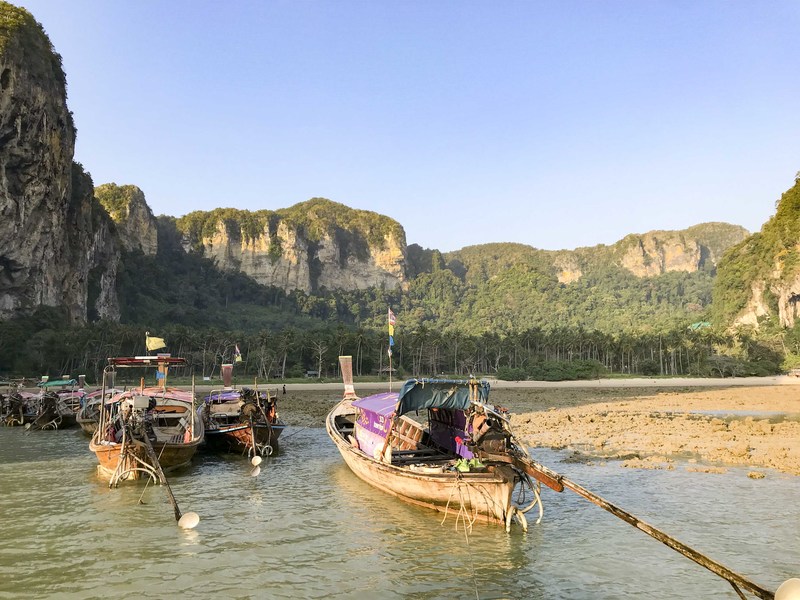 Threading our way back to the beach at low tide took all the skill our pilot could muster.

Tonsai had been billed as "A hippie climber's settlement" and it certainly lived up to that billing. Far less developed than I'd expected, it was just a step or two removed from tents on the beach. A single gravel road arced through the woods from one end of the beach to the other and a handful of small restaurants shared space with hostel bars with plenty of character to spare. A concrete wall that had been erected to keep people off the private acres of land down to the beach carried fliers for yoga classes and its panels were painted with subversive art and slogans like "be weird" and "You are leaving the capitalistic sector."

Keen to get a bit of instruction, I joined an expedition that took a long tail boat to Railay, the next beach over. Railay was certainly more built up with tourist-friendly amenities than the hippie-climber haven of Tonsai.

After bouncing between a few spots that had already been claimed by large groups of Chinese tourists, we hiked into the woods and found our wall. The rocks made a sharp landing for any fall but the handholds were easy jug handles so it was satisfyingly doable.

I returned to Tonsai in time to catch a ferry out but it was by no means a simple endeavor. The ferry horn sounded as it rounded the end of the bay, prompting us to set off to meet them in the middle. Unfortunately, it was again low tide and our designated taxi couldn't get off the mud. The tourists were required to leave their things aboard and push hard, all while the clock ticked and the ferry approached its limited window for rendezvous.

The first several tries failed as we re-boarded only to become beached again by the extra weight. Sweating from the heat and the certain knowledge that ferries and flights waited for no one's muddy excuses, we heaved to again and finally managed a grinding dismount from our perch and were able to meet the ferry while its impatient workers scolded the delay.

Southern Thailand on the Andaman Sea was a sharp contrast to the north near Chiang Mai. More than just a matter of beaches versus mountains, it was too much a return to the tourist trail that I firmly wanted to avoid. The energy of drunken partiers on Koh Phi Phi turned me off and represented a barrier to vibing with the beauty of its underlying nature. Tonsai and Railay were interesting as climbing playgrounds but their charms felt ultimately unsustainable.

With this in mind, I departed southern Thailand with a vague sense of tension that wasn't terribly dissimilar from what I'd felt upon leaving India, more than ready to take a break from tourist-intensive travel and relax as part of a surf camp in Bali.