The Virtuous Cycle of AI Products, also called the "AI Flywheel Effect," is one of the most exciting ideas in Artificial Intelligence and it's also incredibly simple. Essentially, when AI technologies are integrated with a product properly, they create a feedback loop where the product continuously improves with use, generating more usage and a better competitive position relative to other products. 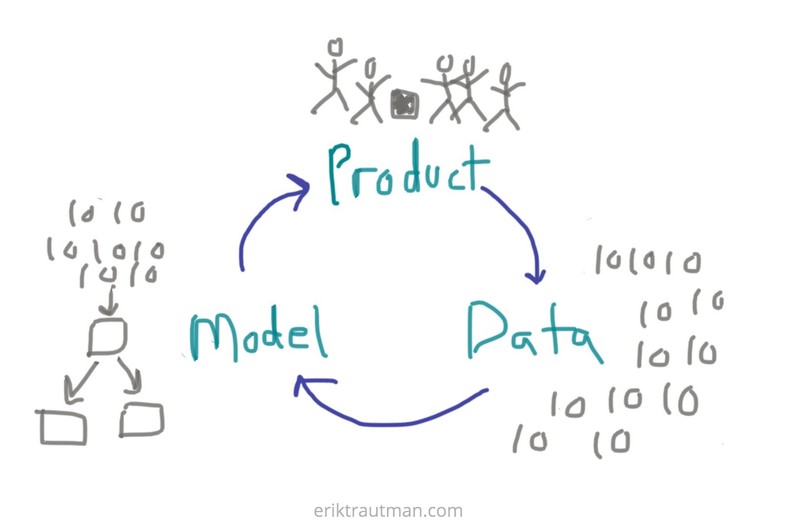 Any product tends to improve with usage regardless of its underlying technology because a good team will use qualitative feedback and analytics data to bring it closer in line with user needs. This improvement, though, tends to reach an asymptote where additional usage and data no longer provide much marginal insight to the product.

When a product's core technology is AI-driven, though, it adds another layer on top of the typical team-driven product improvement cycle. With today's AI technologies (for example Deep Learning), additional data continues to provide marginal improvement for a very long time, allowing the cycle to continue much further than it previously could and improving the core product for a long time.

In the chart below, an AI-driven product would essentially benefit from the stacking of BOTH lines whereas a conventional product only improves via normal efforts: 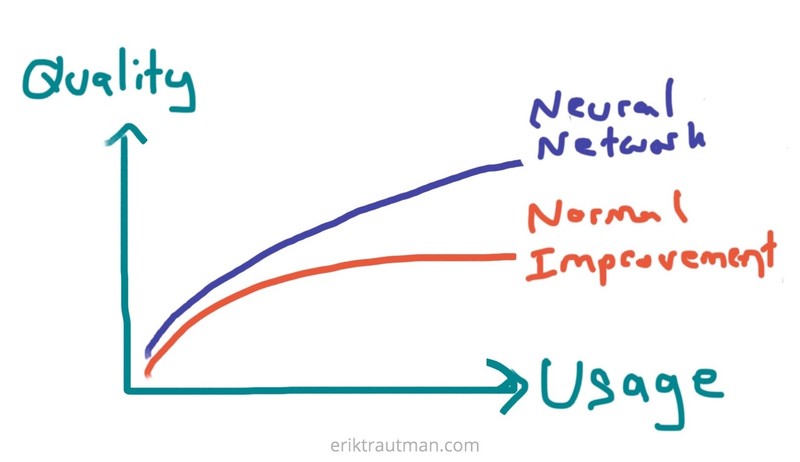 Perhaps the most famous example of this virtuous cycle in action is with a company called Blue River Technology. They use computer vision to detect weeds in farmers' fields and spray just enough pesticide to kill them, reducing pesticide volumes by up to 90% and decreasing the overall pesticide resistance of weeds.

The project started at a Stanford lab, where graduate students went into fields with digital cameras to generate the initial training set. When they had just enough of a viable model to create a product that initial customers would use, their loop began.

With each actual usage in the fields, their training set grew larger and their product became better at detecting and eliminating weeds. This allowed them to penetrate deeper into the market and deliver an ever-improving product experience along the way.

7 years after it began, John Deere acquired the company for $305 million.

Positive feedback loops are enormously powerful. A decent analog in marketing is achieving viral growth, a situation where each user brings in at least one other user, creating an exponential effect. Some of the largest companies in the world (Facebook, Dropbox, LinkedIn) grew this way.

A product that has achieved viral growth has a clear advantage in terms of adoption but that only translates into defensibility if their core moat grows stronger with additional usage. This is true in cases where that moat is due to network effects, for example with Facebook, but not others, like Dropbox (which doesn't have a clear moat).

There are differences between achieving viral growth and achieving a virtuous cycle of product improvement. In particular, a product taking advantage of the Virtuous Cycle of AI Products not only increases usage but becomes a significantly stronger product in the process. This makes it continuously more defensible against competing products. That may translate to being better, faster, cheaper... or even all of the above.

In fact, while the most immediately visible benefit of a product with a strong Virtuous Cycle is increased usage (and growth) through better quality, the more impactful benefit may actually be that digging of an ever-deeper moat between it and competing products. The product begins to pull ahead at an increasing rate resulting from its ever-growing data set. These dynamics only begin to drop off when the marginal improvement of additional data begins to level off. That may occur after the product has already effectively "won" the market.

How Virtuous is the Cycle?

Similarly, not all products will be able to achieve a strong Virtuous Cycle. This is generally feasible only to the degree that the core value of the product is derived from AI technologies which continue to benefit from increased data sets. Products which simply use machine learning to enhance an existing user experience (eg via recommendations) will improve at a lesser rate than those whose core value proposition is directly tied to an AI technology (like Blue River Technology in the example above).

The billion dollar question is to what degree a product can benefit from its Virtuous Cycle and, unfortunately, it is less clear than the degree to which viral growth is achieved (and measured by the Viral Coefficient) because the loop here is far less direct. We essentially need to take into account the proportionality between the usage of a single user and how many additional users will be acquired via eventually improved product quality.

In a world where data science teams have difficulty quantifying the impact of their efforts in dollar terms up front, it doesn't seem feasible yet to create a "Virtuous Cycle Coefficient" analog to the Viral Coefficient seen in growth. I hope that we'll be able to better define this as AI-driven product development becomes more widely tooled and adopted.

Unfortunately, this can result in a bit of hand-waving with regards to how much benefit a given product will get from these effects but shouldn't take away from the core value of the effect itself. We just need to use a bit more critical thinking...