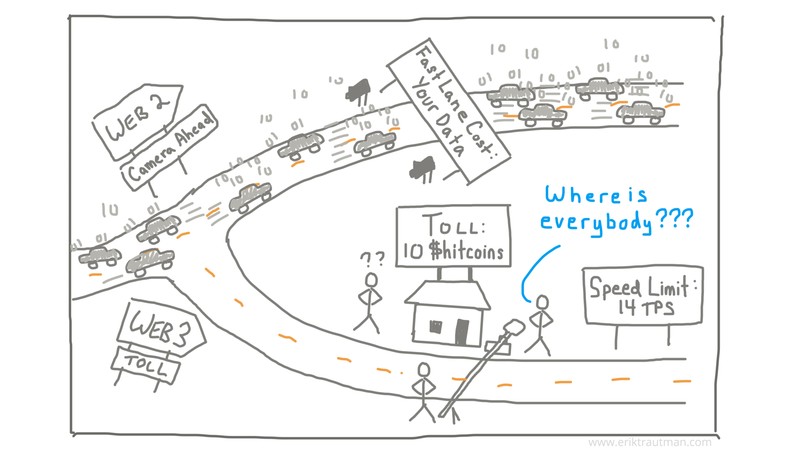 Everyone can agree that blockchain has a UX problem. The top apps right now have literally dozens of users. And no small effort has been undertaken to try and fix all the leaks in the onboarding funnel. But what if this effort is just mopping the decks of the Titanic on most of these systems… totally meaningless in the context of a looming disaster?

How do we begin to untangle which systems will stick around for the long haul and which are doomed to be disrupted from the start?

In crypto economic and consensus discussions, we spend a lot of time cozying up to the work of mathematician John Nash, whose famous Nash Equilibriumis generally considered to be the ideal state for a game theoretic system to achieve.

Specifically, it is defined as:

“…a stable state of a system involving the interaction of different participants, in which no participant can gain by a unilateral change of strategy if the strategies of the others remain unchanged.”

Practically speaking, it means that a system is in equilibrium if the incentives of its participants are aligned such that no one has any incentive to change their strategy to game the system. This is a key design goal in complex game theoretic systems like blockchains where a host of different and potentially adversarial players need to align to achieve the common goals of the system.

We spend so much time focusing on the details of achieving our Nash Equilibrium that we miss the bigger picture that truly guides the evolution of systems on larger timescales: UX Equilibrium.

…a stable state of a system involving the interaction of different participants, in which no participant can gain a better experience by introducing a better product or service if the other products or services remain unchanged.”

Throughout the evolution of technology and products of all kinds, one underlying question has driven literally everything we’ve achieved on a macro scale: what makes the lives of users easier or better?

The pursuit of better human experience is itself the North Star for all of human progress. It has driven us to relentlessly climb Maslow’s Hierarchy for millennia and it will keep the direction of progress relentlessly pointing forward.

What doesn’t change is people

New technologies often arrive and create discontinuities in the UX curve because they provide 10x value along some other dimension like, for example, cost. This often allows them to get away with offering suboptimal experiences in the short term. But, as the rise of both Apple and Amazon to become trillion dollar companies should clearly attest, what ultimately matters on a longer timescale is a fanatical focus on the user experience.

This smooths out all the discontinuities of temporary and unsustainable disruption.

Remember file sharing? In the early 1990s, the only way to own that song you wanted was to get your parents to take you to the music store to purchase a CD with 15 tracks of garbage for $17.99. You could call this a system in equilibrium — record companies made money, artists made money, and consumers purchased the music they wanted.

But, even though that felt like an improvement over the continuous play, rewinding and flipping of 8-track tapes, it was far from the best available experience.

At the turn of the millennium, Napster introduced P2P file sharing to millions of people, allowing them to sit at home and download that track for free. This totally changed the way we thought about the acquisition of music but it wasn’t a stable system — artists weren’t getting paid and record companies weren’t getting paid so the system wasn’t in equilibrium.

We had improved the experience for consumers at the cost of the sustainable experience of the content producers they relied on to produce content.

In 2001 Apple introduced the iPod and everyone justifiably lost their shit but the real innovation came in 2003 when they allowed the legal purchase of individual tracks via the iTunes Store that shipped with iTunes 4. This both improved user experience by allowing consumers to avoid the technical and legal problems of downloading via file sharing networks and created an equilibrium which has persisted to this day (and is shared across many services) in compensating content creators for their work.

We can cycle through plenty of counter-examples where companies or industries tried to capture users in high value but low UX scenarios.

Zynga (remember FarmVille?) was built on the top of spamming users’ Facebook feeds and became just a flash in the pan when Facebook wisely pulled the plug due in large part to the destruction of their user experience.

Even markets for services that seemed commoditized have been disrupted by the pull of good UX. The rise of companies like Mailchimp, Trello and Slack in industries that were “already won” shows the fight is never over if there is a more usable solution or, conversely, if your users are only tolerating your service for as long as it takes the competition to build something easier to use.

Jeff Bezos summed it up well:

If you read between the lines, what doesn’t change is people. Human motivations and behavior are surprisingly resilient. And the experience of humans using your product or service literally defines UX. So ideal UX will always involve asking “what can we do to make users’ lives better?”

Like all transformative technologies, blockchain is having growing pains. No one really knows how to determine whether this is a $100 Trillion Opportunity or a neat side project that never fully breaks free from the cypherpunks, anarchists and third world’s failing nation states.

But one thing is certain — if we’re going to break out, we have to design systems that respect user experience. Those that don’t may win the first round but are doomed to fail when another gets us one notch closer to UX equilibrium.

For entrepreneurs and investors who are playing this game for the long run, a strong understanding of UX is your road map for steering clear of easily disrupted technologies and businesses.

Unfortunately, in blockchain systems, we have a self-inflicted blind spot when it comes to user experience. Somehow, we’ve implicitly agreed that it’s okay to force users to purchase a token they don’t care about as the cost of using a service that provides little to no marginal value over the tokenless alternative.

We’ve started from the technology layer and imagined what will happen when it pushes upwards through the stack, bubbling tokens up to these users and fantasizing about a world where they transact regularly across multiple currencies as part of their daily life. But what human actually behaves this way?

This is about more than just agreeing on guidelines and best practices for DApp design, it’s starting from first principles for designing successful systems. We should be starting from the user and imagining how their experiential needs will push downwards through the stack, allowing them to hang onto as many of the things they are already familiar with as possible.

If you want the tactical details of getting started with a UX-friendly design process in blockchain, there are plenty of great posts written on the topic:

Blockchain Design Principles
What our team has learned so far—about business and user needs specific to blockchain—that informs our design work.medium.com

Designing for Blockchain: What’s Different and What’s at Stake
How to design for trust around a “trustless” technology.media.consensys.net

Current UX Issues of the Blockchain Technology
Emerging technologies require both high value and good UX to be successful. In fact, the popularity of a technology…blog.goodaudience.com

Fundamentally, though, we shouldn’t just design more efficient ways to box users into bad experiences. We should be asking ourselves broader questions like whether tokens are even necessary at all to build a web that puts users first.

For example, if a token isn’t providing access to a scarce and valuable resource which cannot be acquired any other way, it will be forked out or disrupted by an experience which delivers the same without the extra hurdle. While some projects will pass this test, most do not.

We should question whether transaction fees (or even transactions) are necessary at all to deliver a service. Whether it might not be easier for the user to just interact in their native fiat currency throughout the entire system. Or even if blockchain is necessary at all. It’s okay if the emperor has no clothes as long as we don’t pretend it’s not true.

This might mean a world where most protocols are actually just regular open source projects and DApps use real business models rather than ICOing. Where automated DEX’s perform a significant amount of chain abstraction and services fill the remaining gaps so most barrier-to-entry “utility” or “application” tokens are relegated to the dustheap of history.

Regardless of the exact path you see ahead, remember that the long term is governed by what doesn’t change and that is always human nature and the desire for a better human experience. The degree to which we’re able to provide it in the blockchain space will determine who wins and how big this opportunity really is.