It's been some time since I had 10 minutes free to write. Well, that's not true... by my count, I've written over 800 pages of text and recorded dozens of hours of video in the last 4 months but that's exactly the problem. There's not a lot of room in the margins for creative expression when you're teaching a cohort of students, writing curriculum, managing a team, growing a business and trying to learn how coffee works.

The Viking Code School is the full consumption of my soul right now and rightly so. I'll give it far more just treatment when I'm able but, for now, suffice it to say that it represents the marriage of 2 years of hard work with a lifetime of dreaming about making impactful changes in education.

We're building a highly focused online coding bootcamp that's the first of its kind -- it combines the rigorous and collaborative nature of an in-person bootcamp with the reach of the online medium. We're educating prospective developers and entrepreneurs who want to take their ideas to reality.

The Odin Project is a free online curriculum for learning web development with Ruby on Rails. It stitches together the best existing content into an opinionated and straightforward path for going from total novice to hireable as a junior developer.

I recently overhauled http://www.theodinproject.com to turn the website from the barest minimum into the kind of platform that can support a meaningful user experience and grow over time.

Because the project is founded on the belief that transparency and openness facilitate learning, in this two-post series I'll walk through the decisions behind the redesign and the tactics and trade-offs that were a part of its implementation. Find the first post here.

With the redesign goals laid out and the wireframes put together (see Part I), the needs of the users and the site owner were represented and it was time to move towards actually building it.

The Odin Project is a free online curriculum for learning web development with Ruby on Rails. It stitches together the best existing content into an opinionated and straightforward path for going from total novice to hireable as a junior developer.

I recently overhauled http://www.theodinproject.com to turn the website from the barest minimum into the kind of platform that can support a meaningful user experience and grow over time.

Because the project is founded on the belief that transparency and openness facilitate learning, in this two-post series I'll walk through the decisions behind the redesign and the tactics and trade-offs that were a part of its implementation. You can view Part II here

The Odin Project started from some pretty darn humble beginnings -- it originated as a collection of Markdown files about web development on Github and a splash page that linked to them:

At the end of every December, I clean off the white-boards, flip to a new sheet of paper in my notepad, and sit down to reflect on the past 12 months and plan for the coming year. The older I get, the more importance this ritual seems to have. The end-2011 review put me on the path to upending my life and moving to San Francisco. End-2012 end-capped the most disruptive and incredible year of my life and had so many unknowns that it was almost impossible to plan more than a few months ahead into 2013.

All those unknowns meant that a lot happened in 2013. I learned how to code, worked at a startup, broke off a long term relationship and founded The Odin Project. I've also become more and more fully engaged with life -- I'm getting closer to eliminating "empty time" like mindless web surfing or TV watching or other wasteful activities.

When I was in college I played poker online and did well enough that it steered me towards an interest in trading on Wall Street. I liked what I learned about trading and decided that I wanted to someday start a hedge fund. My friend's father headed a public company at the time and he put me in touch with two fund managers so I could get some advice.

The first guy I called worked within an old-style bank. I don't remember much of anything from our conversation except that he seemed a bit... "traditional"? My questions weren't very good and his answers were pure vanilla. I learned nothing.

The second guy was a different story. He ran a nimble long/short fund with a few hundred million under management and had needed to scrap for every victory. From the second he picked up the phone I could tell he was short on time and low on patience. I kind of stammered through my list of questions and he gave me answers that appropriately reflected the poorly researched nature of my queries, which included things like "what is a long/short fund exactly?".

This post is based on a great talk given by Jared Fliesler, formerly VP of User Acquisition at Square.

How do you begin thinking about growing your startup or product? "Build it and they will come" is long gone and "Be user centric" has taken over product development but what frameworks do we have to think about growth and user acquisition specifically?

These 4 simple steps, starting from the most coarse to the somewhat finer grained, should get your feet firmly planted and your mind pointed in the right direction.

Every product has a single core user experience, a set of finite steps that represent a successful use or transaction. If you had to define your product's use in as few steps as possible, what would it look like? What happens after the use is complete?

This letter was addressed some time ago to the younger sister of a good friend, a very smart young lady who grew up without a lot of resources in a small town and who was struggling with the specter of college admissions and the general life questions raised by the process. I don't want to dive too deeply into the background, but it's a situation which puts one at a crossroads -- staying home and living a big life in a small town or throwing the dice and heading off to school elsewhere.

I don't often go out of my way to check up on people or give advice but I know you've got such great potential that I feel like I should make sure you get off on the right path and such. I've included some thoughts about various things (that got longer than I initially expected) and an invitation to call me for whatever reason anytime about whatever random BS is giving you grief and slowing you down.

As a bottom-up guy, I've always needed to see the gears working to trust that the machine will do what I say it will. More than that, I believe that understanding the machine provides an unmatched power to deploy it.

So to confidently build a web-based tech business, I had to start by learning web development. But as important as that is, it's also easy to get caught up in the sprint and lose sight of the greater goal. Spending nights and weekends feverishly coding sure feels like a productive use of time and it can be a fantastic creative outlet but it isn't the optimal path to building value.

Recalling the Simple Model of Value Creation I laid out before, I've so far been learning the skills of a producer, the most granular level of value. It's an incredibly important skill set -- the best generals were soldiers and the best founders were product grunts too.

In the service of creating value, there are three major levels of specificity -- Producer, Product, and Enterprise. Think of it like a series of concentric circles. As you move from the inner circle of Producer to the outer circle of Enterprise, you greatly increase your value creation leverage. 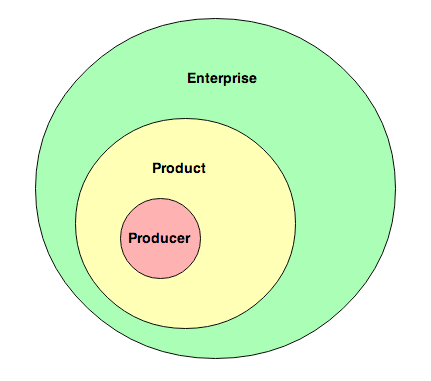 A Producer, for instance a coder or designer, is the most granular unit of production. A producer represents the deployment of a skill or set of skills. Though talents vary, the leverage of this individual is 1. Producers form the backbone of value creation and the ideal producer is one who has achieved expertise in their domain but also understands where that fits into the overall product picture.