I built this website myself. To all you designers and developers out there, that's hardly an accomplishment but for someone who had never heard of style sheets until a few months ago and hadn't seen an HTML tag since a high school 101 course, that feels pretty okay. From the day of my initial launch using Wordpress, I knew that I wanted to take control and eventually build the site from the bottom up. Today is version 1.0 of that vision.

I believe it's important to be a details person. When I tackle a problem, I want to know it from the bottom up. I want to know how every link in the chain is put together before I zoom out and start solving the overarching task. It doesn't mean that I need to drown in the minutia of things, but I'd like to be able to picture it in my head before manipulating it. Since I'm interested in putting together web-based products, it was a given that I'd need to build my own site.

Launching a website is in some ways a microcosm of what it's like to start a company. It is incredibly empowering to take an idea and execute it and that's the reason I'm doing this with my life now instead of sitting in front of seven monitors slinging California power dailies at 6:30 every morning. When you're able to execute, you are only limited by your imagination and the quality of the people you partner with.

I won't ever kid myself into believing that I'm a developer. I didn't do this stuff since I was 15 and, though I love getting temporarily addicted to coding, my life is incomplete if that becomes its major focus. I'm still doing this for the big picture of being able to drive my own vision forward. My hope is simply to be able to code my way to (at least) the prototype stage of"¦ whatever it is that I am trying to do. But knowing how to get into the widgets of an idea and at least speak developer is a huge leg up for achieving that execution. It also means that I will someday be better able to communicate my needs to my team and understand their capabilities, limits, and where the envelope can be pushed.

I've learned an absurd amount throughout this process. I picked up HTML, CSS, some Javascript, some MySQL, and PHP. I've banged my head against the proverbial wall numerous times but always found the missing apostrophe or semicolon eventually. Beyond the obvious front-end stuff, I put together the databases to store everything and even the CMS that runs it all behind the scenes. At times the momentum of building has been pure addiction and at others it has been a colossal pain in the ass. But, in the end, the reward of seeing something I built displayed and (hopefully) functional on the web is well worth the effort and there's a lot more to follow.

A screenshot of this release (since it will certainly change over time) is available below: 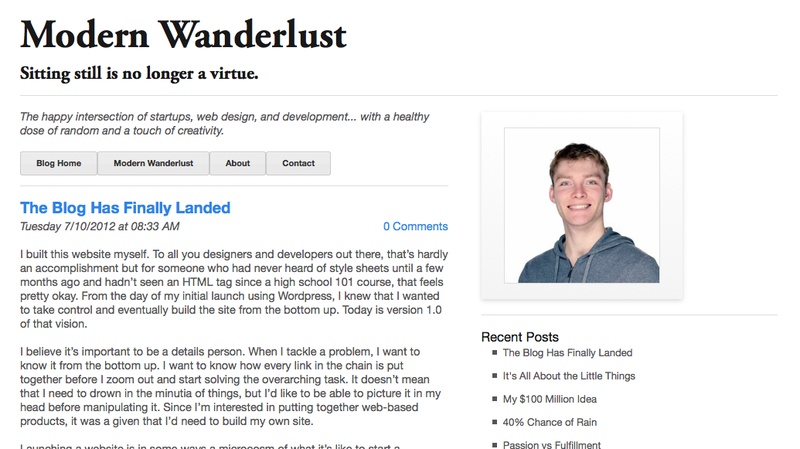